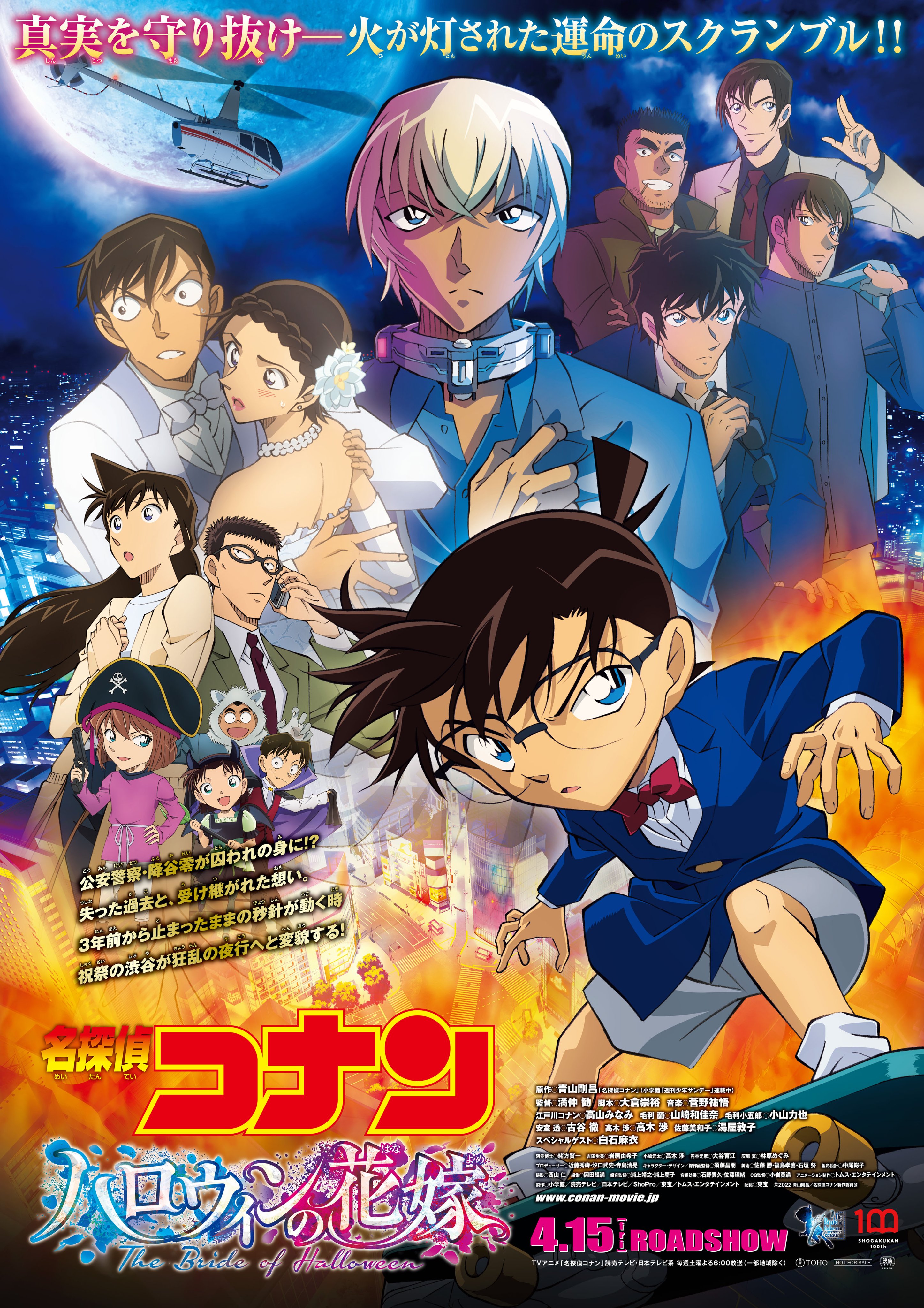 Tokyo. The Shibuya district is in full swing for Halloween. Detective Sato is in her wedding dress in front of a crowd of guests, including Conan of course! Suddenly, an attacker bursts into the room and Detective Takagi is injured while trying to protect Sato. He survives the attack, but it brings back the memory of Detective Matsuda, whom she was in love with, who was killed in the bombings three years ago. At the same time, the perpetrator of these attacks escapes from prison. Coincidence? To avenge his classmate, Detective Furuya alias Toru Amuro goes in search of the fugitive who sets a trap for him. Conan finds Amuro with a bomb around his neck in an underground shelter. Amuro tells him that 3 years earlier, his comrades of the police academy met in Shibuya Plamya, a bomber. A disturbing shadow hangs over Conan and his friends. The crossroads of destinies ignites, Halloween turns into a raging parade.

Detective Conan has imposed itself in Japan as a real cultural phenomenon, adored by a very large public but also by critics who underline the care given to the scenarios of the different adventures but also to the animation. At the origin of this universe very rich in various characters and gadgets of all kinds, there is a series of Japanese police manga written and illustrated by Gosho Aoyama. It was serialized in Shogakukan's Weekly Shōnen Sunday shōnen manga magazine since January 1994, and its chapters are collected in 100 tankōbon volumes starting in October 2021. As a result, there are more than 250 million copies of the manga volumes in circulation worldwide in 2021. The anime series for television broadcast in Japan has no fewer than 1,000 episodes, and the growing success has spawned a series of movies for the cinema, of which Detective Conan: The Bride of Halloween (Meitantei Conan: Halloween no Hanayome) is the twenty-fifth.

While the United States dominates the world in animation, notably with The Walt Disney Company, Pixar Animation and Sony Pictures Animation, it is always interesting to discover Japanese films that break out of a pre-formatted mold in which these films are intended for a young audience, even if adults can easily find their account, notably through the Disney nostalgia that marked our childhood and predestined us to love the cinema and to take a real pleasure in discovering new films in a theater and sharing laughter and common fears. For all those who grew up like us in front of many Japanese series such as Goldorak by Go Nagai, Space Cobra Dezaki and Yoshio Takeuchi, discovering Detective Conan: The Bride of Halloween (Meitantei Conan: Halloween no Hanayome) proves to be a true cinematographic experience far from the conformism of the big Hollywood studios.

In this new chapter of the adventures of Detective Conan, the director Susumu Mitsunaka benefits not only from an excellent scenario favourable to numerous twists and turns written by Okura Takashiro but he also brings his visual style in a feature film which will please as much an audience fascinated by Conan and having seen the previous films as a new one which will be able to discover at the beginning of this film a precise and perfectly brought recapitulation of the numerous ramifications of this universe and in particular how a young adult found himself with a child's body while keeping intact his IQ, his strength and his sense of observation. The scriptwriter Okura Takashiro is also known as a writer of crime novels and has repeatedly participated in the scripts of many anime of TMS Entertainment Studios. Having also written the screenplays for the films Detective Conan: The Scarlet Love Letter (Meitantei Konan: Kara Kurenai no Rabu Retta) (21), Detective Conan: The Fist of Blue Sapphire (Meitantei Conan: Konjō no Fisuto) (23).

The plot of this film keeps the audience sufficiently entertained and avoids using unnecessary gimmicks to fuel the action of the film. However, it proves to be exciting as it is part of a desire to highlight the twilight beauty of the city of Tokyo and to continue the development of the main characters. Thus, while the Shibuya district is in full swing for Halloween, we find Detective Sato in her wedding dress in front of a crowd of guests, including Conan. While one might expect to follow the normal flow of a wedding, things take a turn for the worse when an assailant bursts into the wedding hall and injures Detective Takagi as he tries to protect Sato. The wedding turns out to be a mere reenactment to plan how the police force should organize for an important upcoming wedding. Meanwhile, a dangerous criminal escapes from prison and causes Detective Furuya aka Toru Amuro to be caught in an evil trap. Again the plot will take a particular turn when this criminal is blown up and a criminal seems to take a malicious pleasure to eliminate embarrassing witnesses.

Conan finds Amuro with a bomb around his neck in an underground shelter. Amuro tells him that 3 years ago, his classmates from the police academy met "Plamya", a bomber, in Shibuya. A disturbing shadow hangs over Conan and his friends. The crossroads of destinies are set ablaze, Halloween turns into a raging parade. The plot of this film does not hesitate to use many flashbacks and to build a real puzzle that Conan will have to unravel and face a deadly danger and also save Tokyo from a terrorist attack. We won't say more to reserve you good surprises except that we advise you to stay until the very end of the film because there are two post-credits scenes which are worth seeing.

The scriptwriter Okura Takashiro understood perfectly that a movie based on the universe of Detective Conan should not be a long episode that its structure should be limited in order to tell a unique adventure while leaving the door open to probable future developments. The many scenes in this film hold the audience in suspense and are akin to a real blockbuster (the ending is particularly gripping). The film also celebrates important themes such as friendship, constantly surpassing oneself and knowing how to have a true moral code. By avoiding the use of gimmicks and refocusing the action on the plot, Detective Conan: The Bride of Halloween (Meitantei Conan: Halloween no Hanayome) is an undeniable success.

For the novices like us of the Detective Conan universe, this movie proves to be an excellent introduction and makes us want to discover the other movies of this cinematographic saga. Detective Conan: The Bride of Halloween (Meitantei Conan: Halloween no Hanayome) is definitely one of the must-see movies of this year and we can only advise you to discover it in an excellent cinema. While we have some difficulties to see movies in languages we don't master, the original Japanese version is a pleasure to watch and takes us in a thrilling adventure and marked by a music of Yugo Kanno perfectly in phase with the action of this movie.