Money Merc, a famous rapper, is supposed to compose a new album in a house far from everything. But, tired of his career and the pressure that surrounds him, he discovers an unexpected taste for the life of a farmer. 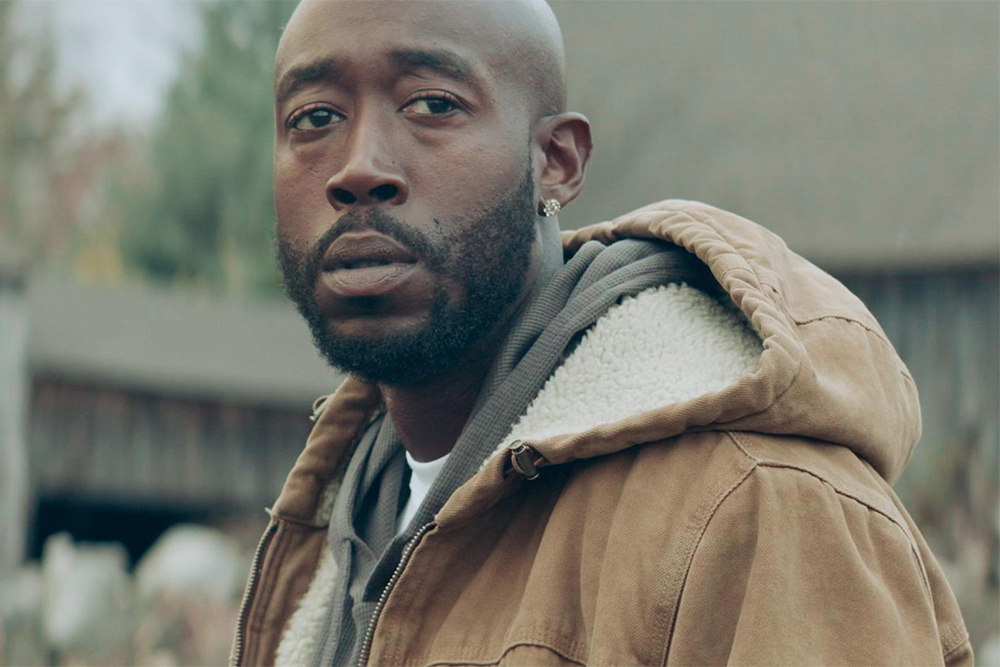 This year the American Film Festival of Deauville awarded the Grand Prix to the film co-written and directed by Diego Ongaro Down with the King. A more than questionable choice, given that this director's second film is certainly interesting to follow but cruelly lacks the emotional force of the Grand Prix of the public Blue Bayou (our favorite film of this edition). We can easily understand the will of the director Diego Ongaro to make a film about the environment in which he lives in the United States and to bring our glance on these small American towns in which farmers try to continue to live decently. Far from the glitz of the American rap scene and the omnipresent new technologies, Down with the King shows the benefits of a return to the countryside to recharge one's batteries.

Rap star Money Merc (Freddie Gibbs) has been sent by his manager, Paul, to a country house in the Berkshires to focus on his next album. His lack of inspiration and the feeling that he has lost his mojo and his status as a world-renowned rapper make it seem easy for him to adjust to his new life away from the hustle and bustle of his rapping life. Money Merc no longer wants to focus on creating his new album and prefers to spend his time with his new neighbor, a farmer and pig and cow farmer. Money Marc learns how to raise animals and the hard work that goes into farm life. Far from the abundant money of the rap world between albums and world tours, Money Merc begins to love his new lifestyle and goes so far as to announce the end of his artistic career on his social network Twitter to the dismay of his producer and friend Paul.

In order to play the card of credibility permanently the director and co-writer Diego Ongaro called on the American rapper Freddie Gibbs to give life to his character Money Merc and thus could make his film a rather interesting anlayse of the end of the career of a rapper who seems to have lost his inspiration and his way of always wanting to fight. Certainly this judicious choice makes Down with the King an interesting film if not permanently captivating. In the same way the rapper Money Merc seems to take a real pleasure to leave the sphere of the rap to live normally far from the lights of an ephemeral celebrity. He even comes to love a saleswoman of a tool store, Michaele (Jamie Neumann), who only aspires to leave far from this deep countryside in which time seems to have stopped.

The director Diego Ongaro praises through his film the virtues of life in the country and especially shows clearly the toxicity of social networks that have become a real battleground between rap personalities who seem to fight constantly to be the one who will put the most in the eyes of the public and other rappers. However, Down with the King is cruelly lacking in striking scenes and especially fails to make us feel where the inspiration for rap comes from and how artists manage to find the right tempo to give life to striking hits. Down with the King doesn't manage to make us forget Curtis Hanson's cult film 8 Mile in which Eminem was an excellent actor and transcended everything related to rap on the big screen.

However, Down with the King is a successful film because of its willingness to mix professional actors with beginners and to find the right balance so that all the actors sound good and give their character the necessary thickness. Oscillating between a documentary approach to country life and a psychological drama, Down with the King was certainly one of the good surprises of this edition of the Deauville American Film Festival, although in our opinion it was not the best of the official selection.

Seen on September 7, 2021 at the Centre International de Deauville