Izzy is a teenager who lives with her mother in a house deep in the Catskill Mountains. Such isolation is no accident: Izzy's mother has worked hard to keep her daughter away from society since she was five years old, for her own protection... and that of others. Mother and daughter are best friends, spending their time teaching each other things or playing music - their rock band is called H6LLB6ND6R. But as Izzy grows up, she begins to venture out into the city to spend time with others. A thirst for knowledge awakens in her: knowledge of herself, and knowledge of her family, which has roots in... witchcraft. 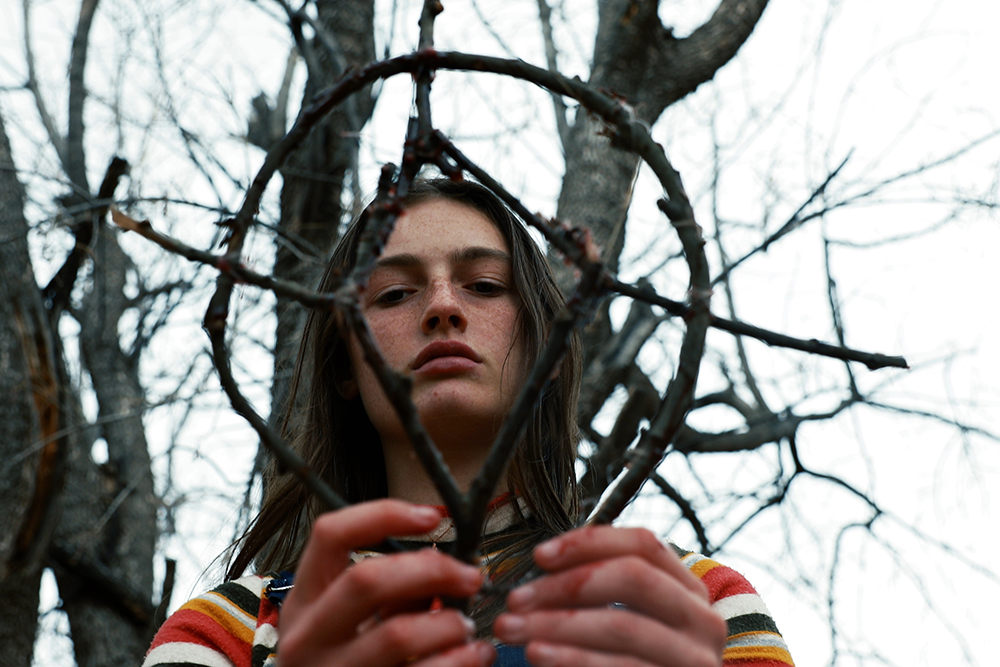 "Hellbender is absolutely stunning. I am obsessed with every frame and couldn't be more excited to partner with Shudder on the release of such an ambitious and unique film."-Justin Timms of Yellow Veil Pictures

As our society continues to be in a pandemic that drags on despite a vaccine, film continues to play an important role in taking our minds off our current sad times and entertaining us. Covering a festival like Fantasia allows us to discover many independent films that for the most part will not be released in theaters but on streaming platforms like Netflix, Prime video and Shudder. Hellbender was acquired by Shudder before its release during the Fantasia festival.

Sixteen-year-old Izzy (Zelda Adams) suffers from a rare disease that has kept her isolated on a mountaintop with her mother (Toby Poser) her entire life.  As Izzy begins to question her illness, she pushes back against her confinement and secretly befriends Amber (Lulu Adams), another girl living on the mountain, but her newfound happiness is derailed after she eats a live worm as part of a juvenile game and an insatiable, violent hunger awakens in her. To understand this hunger, Izzy must learn the dark secrets of her family's past and the ancient power of her bloodline.

This year the Addams Family returns to Fantasia with a significantly more accomplished film than their previous The Deeper You Dig (2019) and offers us a film that is as much about witchcraft as it is about coming of age. Hellbender is full of original ideas and delivers a mother-daughter confrontation worthy of the great witchcraft films and above all relies on a staging really bubbling with pure energy and magnified by the music that seems to unite this non-traditional family and whose many secrets will be revealed.

Far from being confused in a fantastic comedy told many times, the scenario of John Adams, Zelda Adams, Toby Poser allows to bring a new look on the world of modern witchcraft and especially asks itself fundamental questions such as the mother-daughter relationship, the search for one's own identity and place in society. By contrasting two universes, the real one and a parallel one in which everything seems possible, Hellbender stands out as one of the most original and moving films of this edition of the Fantasia festival. It is therefore easy to understand its presence at the Fantastic Fest 2021 (USA) and that it has retained the attention of the Shudder platform.