When Sophie, a blind former skier, cat-sits at a secluded mansion, three thieves invade the premises to steal the hidden safe. Sophie's only defense is Kelly, an army veteran. Kelly helps Sophie defend herself against the invaders and survive. 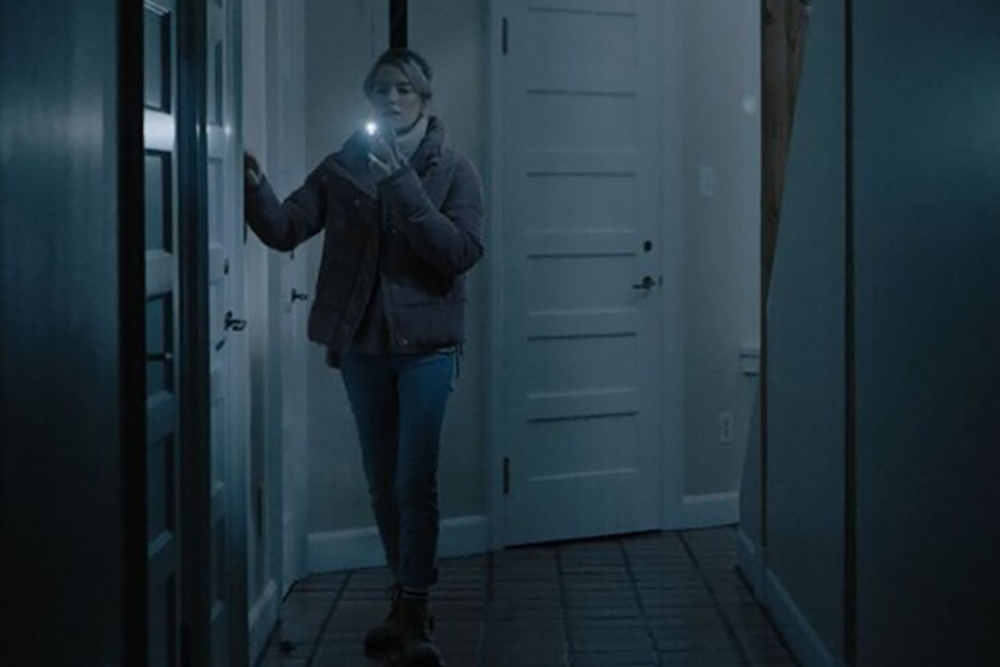 It would be interesting to put Fede Álvarez's Don't Breathe (2016) and Randall Okita's second film, See for me, in parallel. In both cases, the scripts play on the pre-established rules of home invasions to place a blind character who must rely only on his other senses to deal with burglars. Even if the approach is different and Don't Breathe plays the horror thriller card, See for me is only an ambitious thriller that does not benefit from the presence of a gifted director like Fede Álvarez. Randall Okita doesn't fall short, however, with his second film (The Lockpicker (2016)).

Sophie (Skyler Davenport) is a former professional skier who has gone blind. While cat-sitting at a large, isolated mansion, three thieves invade the premises to steal the hidden safe. Sophie's only help is Kelly (Jessica Parker Kennedy), an army veteran who plays first-person shooter games online. By becoming her eyes through the See For Me phone app, Kelly helps Sophie defend herself against invaders and survive, all while fulfilling her ultimate fantasy as in a real-life video game. Adam Yorke, Tommy Gushue's script proves to be clever enough to be gripping and Randall Okita's direction finds the right approach to hold our attention completely.

Having a blind heroine at the center of the story adds an undeniable complementary emotional touch. Likewise, director Randall Okita has a real gift for playing with the audience's nerves and offering an undeniable visual approach. By constantly searching for the best angle for each scene, she makes her anxiety-inducing thriller a truly intense cinematic experience and by constantly refusing to approach the horror genre, she adds an impeccably illustrated dramatic edge. Certainly See for me is not as revolutionary and intense as Don't breathe, but it offers enough attractions to be easily embraced. The actress Skyler Davenport delivers a beautiful and solid performance and the supporting characters like Kim Coates and the too rare Laura Vandervoort show that the supporting roles are not forgotten. See for me remains simple in its story but its form and its visual approach undeniably make the difference.

See For Me is not only a simple home invasion as it incorporates the notion of a robbery by criminals in a rich house but also shows once again the importance of having a good scenario that is sufficiently gripping to hold the attention of the audience. This film, although simple at first glance, gains in effectiveness throughout the story and allows itself to surprise the spectators on several occasions. Sophie, despite being blind, seems to be not as fragile as she seems and manages to find the right approach and the necessary help to achieve her goals. This Canadian film has nothing to envy to Hollywood cinema and is a pleasure to watch. We can only advise you to discover it when it is released soon.