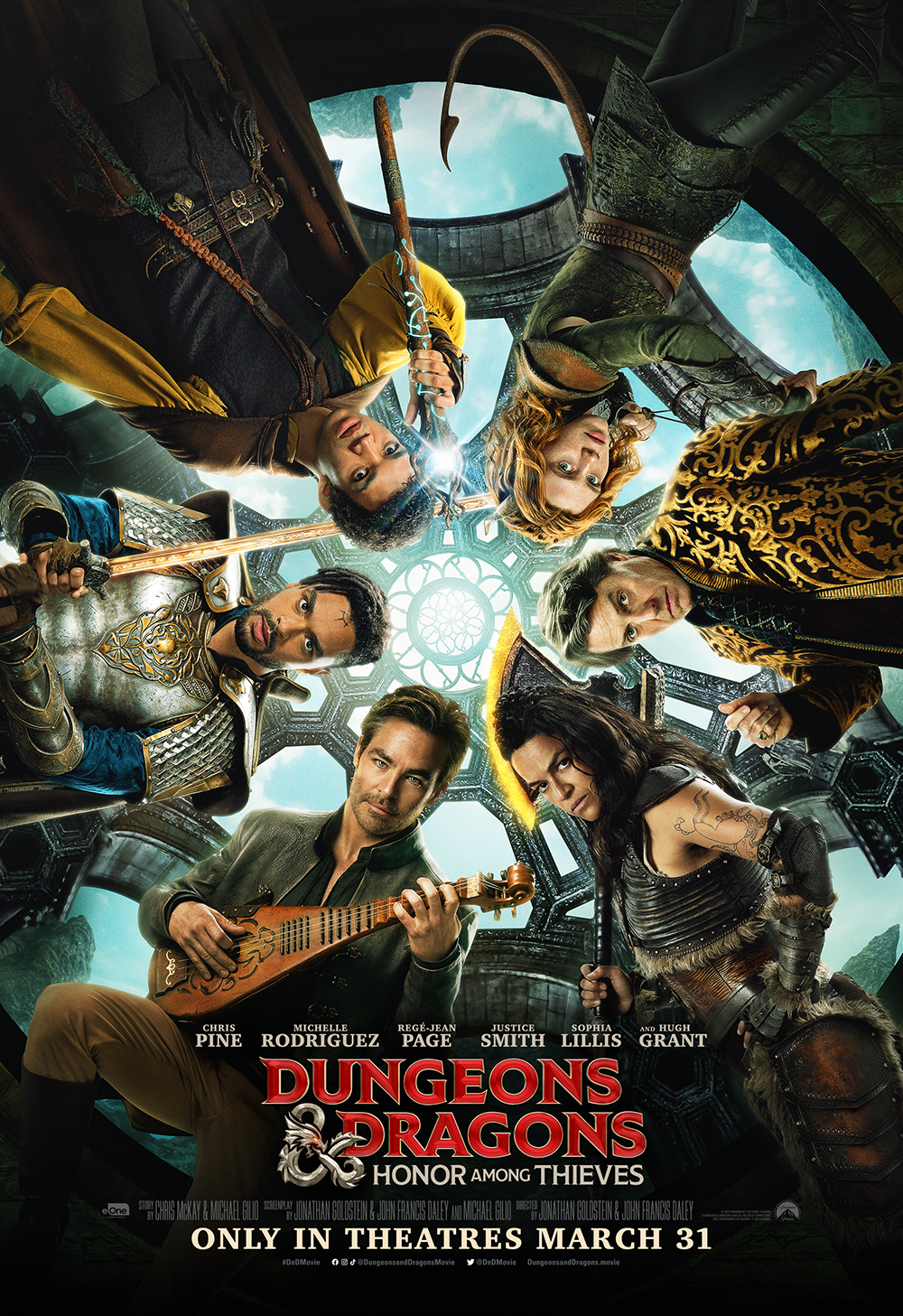 Dungeons & Dragons: Honor Among Thieves is an upcoming action comedy fantasy adventure film directed by Jonathan Goldstein and John Francis Daley, who co-wrote the screenplay with Michael Gilio from a story by Chris McKay and Gilio. Based on the tabletop role-playing game Dungeons & Dragons, it is set in the Forgotten Realms campaign setting  and has no connections to the film trilogy released between 2000 and 2012. The film stars Chris Pine, Michelle Rodriguez, Regé-Jean Page, Justice Smith, Sophia Lillis, and Hugh Grant.

Production of the film went through various phases in development since 2013, beginning with Warner Bros. Pictures after beating Hasbro and Universal Pictures in a lawsuit over the film rights to the tabletop role-playing game, before moving to Paramount Pictures, each with various writers and directors. Goldstein and Daley were the final writers/directors, using elements from the previous attempt by director Chris McKay and screenwriter Michael Gilio. Filming began in April 2021 in Iceland and later Northern Ireland.

On May 7, 2013, Warner Bros. Pictures and Courtney Solomon's Sweetpea Entertainment announced a film based on Dungeons & Dragons with David Leslie Johnson-McGoldrick writing the script and Roy Lee, Alan Zeman, and Solomon producing. Two days later, Hasbro issued a lawsuit saying that they were co-producing a Dungeons & Dragons film at Universal Pictures with Chris Morgan writing and directing. On August 3, 2015, after U.S. District Judge Dolly Gee urged Sweetpea Entertainment and Hasbro to settle the film rights case, the Warner Bros. film was set for pre-production with Hasbro. On March 31, 2016, Rob Letterman was in negotiations to direct Johnson-McGoldrick‘s script, with his role confirmed on May 13, 2016. In April 2017, actor Joe Manganiello, an avid fan of Dungeons & Dragons, revealed that he had written a script with John Cassel for the project and was "talking to all the right parties" to make the film happen. Upon completing the script, Manganiello worked in collaboration with Brad Peyton and Dwayne Johnson, who were both in negotiations to develop the film. 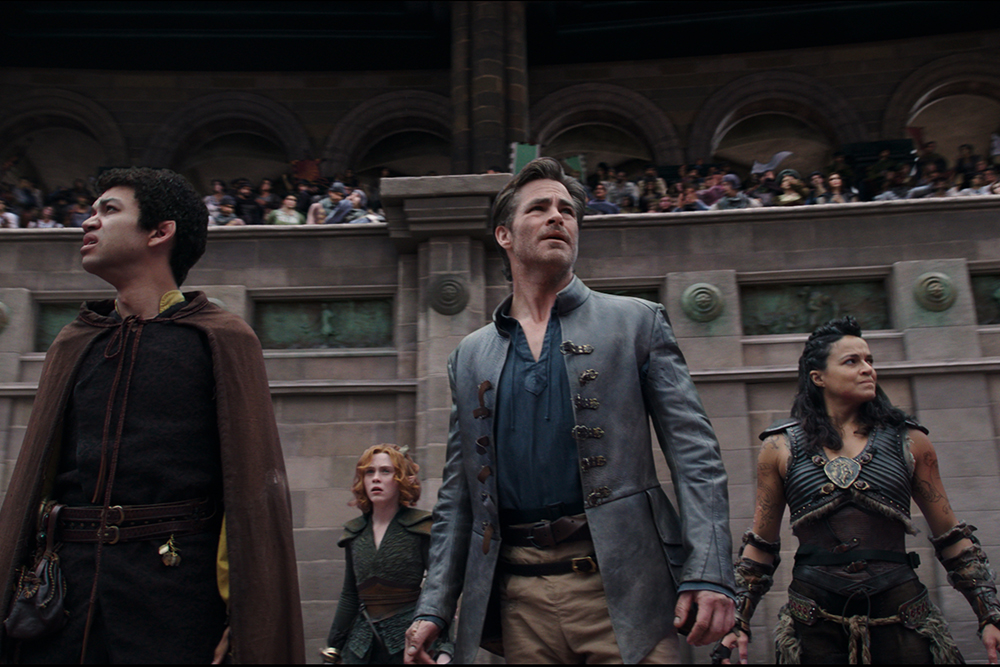 In December 2017, after varying degrees of progression, the film was moved by Hasbro to Paramount Pictures and was scheduled for a release date of July 23, 2021. In February 2018, Paramount was in talks with both Chris McKay and Michael Gilio to direct and write the film, respectively. In March 2019, it was revealed that Gilio had completed a first draft and studio executives expressed excitement for the film. The studio began negotiations with various talent, as the casting process began. On July 30, 2019, Jonathan Goldstein and John Francis Daley were in talks to direct. By January 2020, the filmmaking duo announced that they had co-written a new draft of the script. Ultimately, Daley, Goldstein, and Gilio received screenplay credit, while McKay and Gilio received story credit. In December 2020, Chris Pine was cast to star in the film. Michelle Rodriguez, Justice Smith, and Regé-Jean Page were added in February 2021. Hugh Grant and Sophia Lillis would join the next month, with Grant cast as the antagonist. In April, Chloe Coleman joined the ensemble cast.  In May, Jason Wong and Daisy Head joined the cast. In July 2022, at a panel at San Diego Comic Con, it was revealed that cast members from the Dungeons & Dragons web series Critical Role would make cameo appearances in the film.

Filming began in early April 2021, with a crew of 60-70 people in Iceland. Principal photography commenced in Belfast, Northern Ireland later that month.  On August 19, 2021, Daley announced that filming had completed.

Dungeons & Dragons: Honor Among Thieves is set to premiere at South by Southwest on March 10, 2023, and is scheduled to be released in the United States on March 31, by Paramount Pictures. The film was originally set to be released on July 23, 2021. The release date was subsequently moved to November 19, 2021, to accommodate the release of Mission: Impossible – Dead Reckoning Part One, before being pushed back further to May 27, 2022, due to COVID-19. In April 2021, the release date was further delayed to March 3, 2023. On April 21, 2022, the official title of the film was announced as Dungeons & Dragons: Honor Among Thieves. In November 2022, the movie was delayed to March 31, 2023. 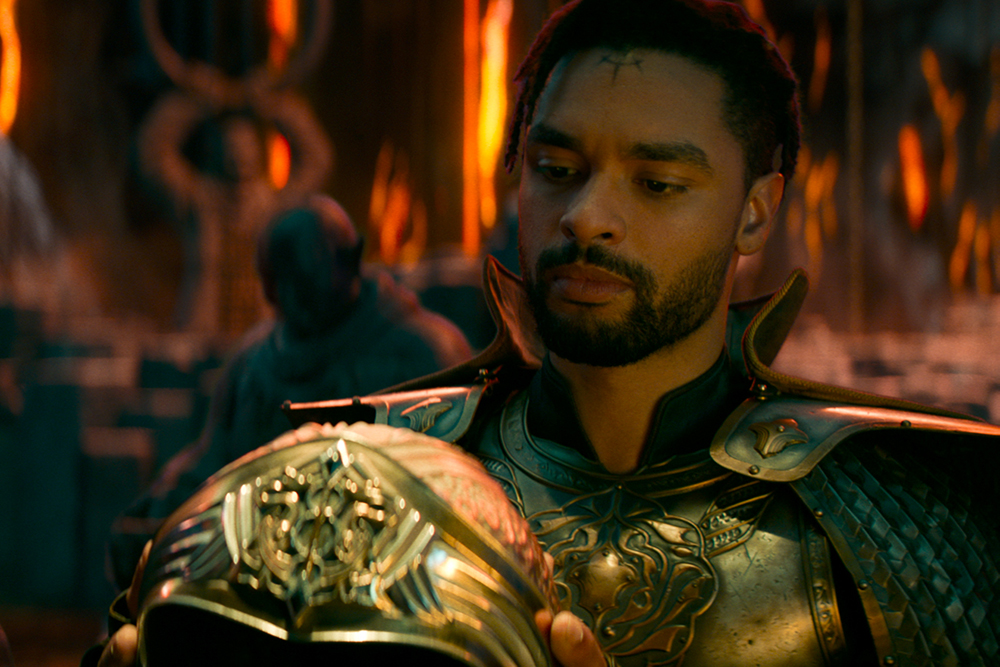 A prequel publishing campaign following various of the film's characters is scheduled to be released in February 2023 before the release of Honor Among Thieves. Doric will be the main character in the upcoming young adult novel The Druid’s Call (2023) by E.K. Johnston and while The Road to Neverwinter (2023) adult novel by Jaleigh Johnson will focus on Edgin Darvis. Dungeons & Dragons: Honor Among Thieves—The Feast of the Moon is an upcoming 96-page prequel graphic novel which will focus on Edgin and his band of thieves. It will be written by Jeremy Lambert and Ellen Boener and drawn by Eduardo Ferigato and Guillermo Sanna.

In February 2022, a spin-off television series was announced to be in development. A part of a "multi-pronged approach" for television projects, the show is described as the "flagship" and "cornerstone" live-action series, of the multiple projects in development; while the series will "complement" the film side of the franchise. Rawson Marshall Thurber is set to serve as creator, writer, executive producer, and showrunner and the series, in addition to directing the pilot episode. Various networks and streaming companies are bidding on distribution rights. In January 2023, it was announced that Paramount+ gave the show a straight to series order and will consist of eight episodes, with Entertainment One and Paramount Pictures serving as production companies.

Dungeons & Dragons: Honor Among Thieves is set to premiere at South by Southwest on March 10, 2023, and is scheduled to be released in the United States on March 31, 2023 by Paramount Pictures.