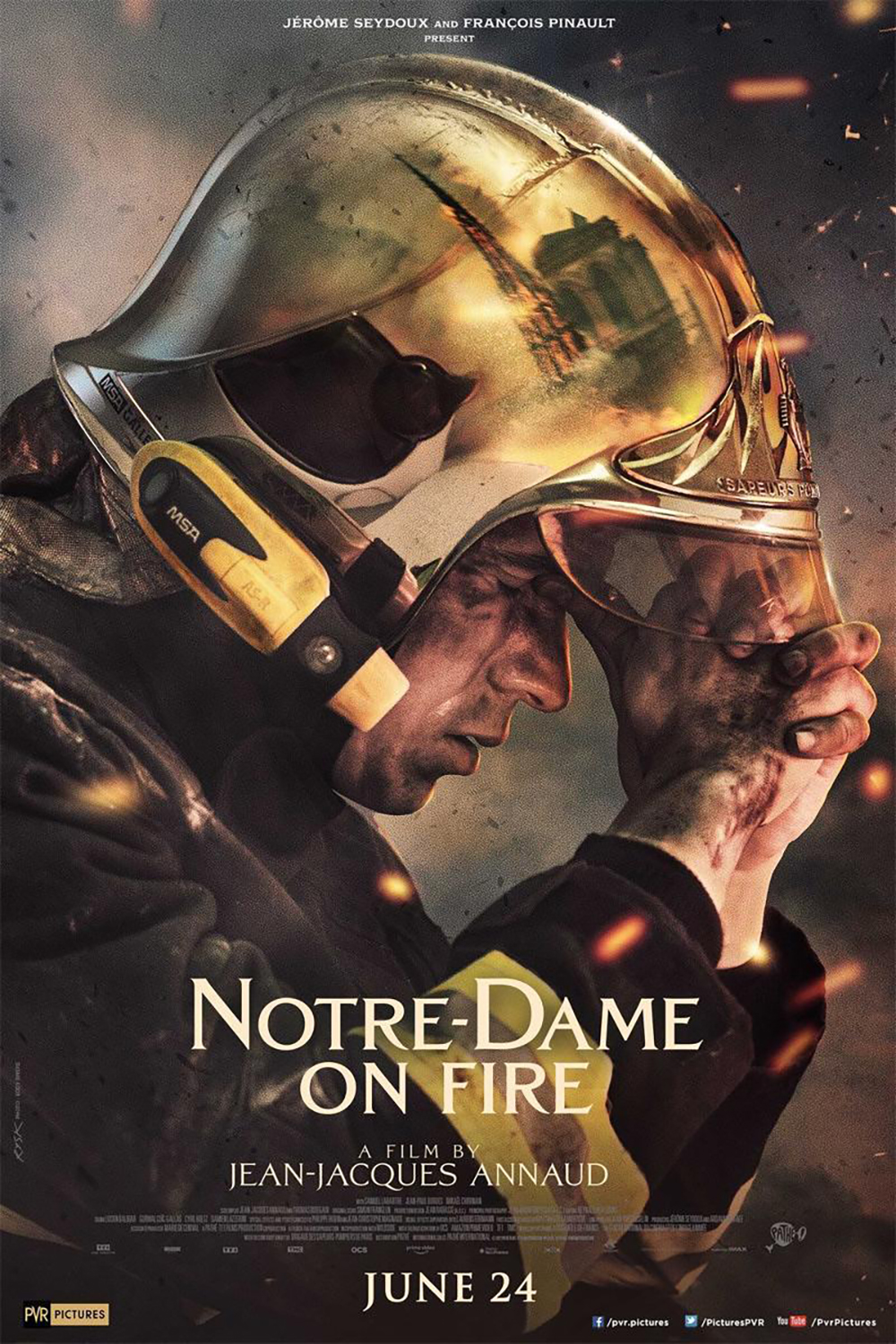 75 Films and Series to be Screened at the Festival Taking Place at the DGA Theater Complex October 10-16; 71 Films to be Considered for The American French Film Festival Awards Beverly Hills, California – September 20, 2022

At a press conference held today at the Résidence de France in Beverly Hills, members of the Franco-American Cultural Fund (FACF) and The American French Film Festival Program Committee announced that the Opening Night film for The American French Film Festival (formerly Colcoa) will be the North American premiere of Jean-Jacques Annaud’s Notre-Dame on fire / Notre-Dame Brûle. The film will screen October 10, kicking off the week-long Festival held at the DGA Theater Complex in Los Angeles.

“Every year, The American French Film Festival presents the very best of French cinema and television, and this year is no exception. I am personally excited about the opening night selection of Jean-Jacques Annaud’s Notre-Dame on fire as I think it perfectly embodies the Franco-American Cultural Fund’s mission,” said Andrea Berloff.

The entire lineup for the Festival was also revealed at the press event and includes 75 films and series and 20 shorts, many of which are International, North American and U.S. premiere presentations. Seventy-one of these films will be up for The American French Film Festival Awards.

“This selection of French films and series in competition for The American French Film Festival Awards underscores - despite the two year pandemic period - the astounding dynamism of the French production community,” said Francois Truffart. “This 26th edition of the Festival is notable for its diversity of genres, the emergence of new talent and particularly for the creativity coming from new female filmmakers.” “As exemplified by this year’s swath of impressive films, French cinema continues to explore form and storytelling that echo Jean-Luc Godard’s freedom to experiment,” notes Anouchka van Riel. “More than ever, The American French Film Festival seeks to build bridges between two countries and tell stories with different narrative structures. This Festival is not only a showcase for French films and series, but also a place where bicultural conversations occur on topics like remakes and young audiences. It is a celebration and an opportunity to promote understanding and build communities.”

Opening night film, monday, october 10: Notre-Dame on fire / Notre-Dame Brûle (North American Premiere) is a blow-by-blow recreation of the gripping events that took place on April 15, 2019 when the cathedral suffered the biggest blaze in its history. The film retraces how heroic men and women put their lives on the line to accomplish an awe-inspiring rescue. The screening will be followed by a discussion with filmmaker Jean-Jacques Annaud.

Closing night film & series: sunday, october 16: the night of the 12th / La Nuit du 12 (North American Premiere presented in association with Film Movement) - Dominik Moll’s thriller about a nagging cold case where the only certainty is the night it occurred was part of the 2022 Cannes Festival selection.  Festival will dedicate its annual focus on a filmmaker to Moll. Also the series Irma Vep, written and directed by Olivier Assayas, co-presented with A24 and HBO, will have its world theatrical premiere at the Festival on closing day .

The festival will also make the first theatrical presentation in North of America of the Netflix epic/drama ATHENA, written and directed by Romain Gavras.

The line-up will also include a Documentary selection, a Classic Program paying homage to Jean-Luc Godard, Jacques Perrin, and Jean-Louis Trintignant, and celebrating Alice Guy, the Short Film competition with 20 new films, and the High School Screenings Program. Information on those selections can be found at www.theamericanfrenchfilmfestival.org.

This year the festival will dedicate its Focus on a filmmaker to Dominik Moll (The night of the 12th), its Focus on a producer to Charles Gillibert (Nobody’s Hero, rodeo & the restored version of The mother and the whore), and its Focus on a composer to Eric Neveux (Soldiers).

Everyday, from Tuesday to Saturday, festival goers will be invited to attend professional panels for free, followed by a complimentary wine and cheese reception. The complete program will be available online at www.theamericanfrenchfilmfestival.org.

The American French Film Festival audience will be invited to vote in the three categories: Cinema,
Television, and Shorts. For the 14th year, The Los Angeles Film Critics Association (LAFCA) will partner with The Festival for the Critics’ Award and the First Feature Award in the cinema category. For the fifth year, a student jury made of high school and college students, will vote for The American Students Award.

A professional jury will vote for the Best Short Film. The complete recipient list of the 2022 Awards will be announced on Wednesday, November 2 during a special ceremony taking place in Paris with all recipients attending. All Films are presented with English subtitles.

Tickets and covid restrictions:
Tickets are available for advance purchase online at www.theamericanfrenchfilmfestival.org starting on September 22. The online box office and RSVP will be open until the night before each show at the festival. Tickets will be also available on site at the Directors Guild of America, 7920 Sunset Boulevard, Los Angeles CA 90046 during the event. For sold out shows, some tickets may become available 20 minutes before each screening. Please visit www.theamericanfrenchfilmfestival.org for box office hours, week-long passes, and ticket prices. Discounts are available for members of American Cinematheque, ASC, ICG, Film Independent, SAG-AFTRA and Women in Film. Limited opening night tickets available at the Box Office. Tickets are complimentary for DGA and WGAW guild members. All screenings and events before 4 pm during weekdays are free on a first-come/first-served basis with no reservation needed. Masks must be worn at all times in the DGA’s public spaces, including theaters, lobby and restrooms. Covid rules may change depending on state and city restrictions. Visit our website for updates.

The American French Film Festival (formerly known as COLCOA) was created and is produced by the Franco-American Cultural Fund, a unique collaboration between the Directors Guild of America (DGA), the Motion Picture Association (MPA), France’s Society of Authors, Composers and Publishers of Music (SACEM) and the Writers Guild of America West (WGAW). The American French Film Festival is also supported by Unifrance, the French Ministry of Foreign Affairs, and France’s Society of Authors, Directors and Producers (l’ARP).