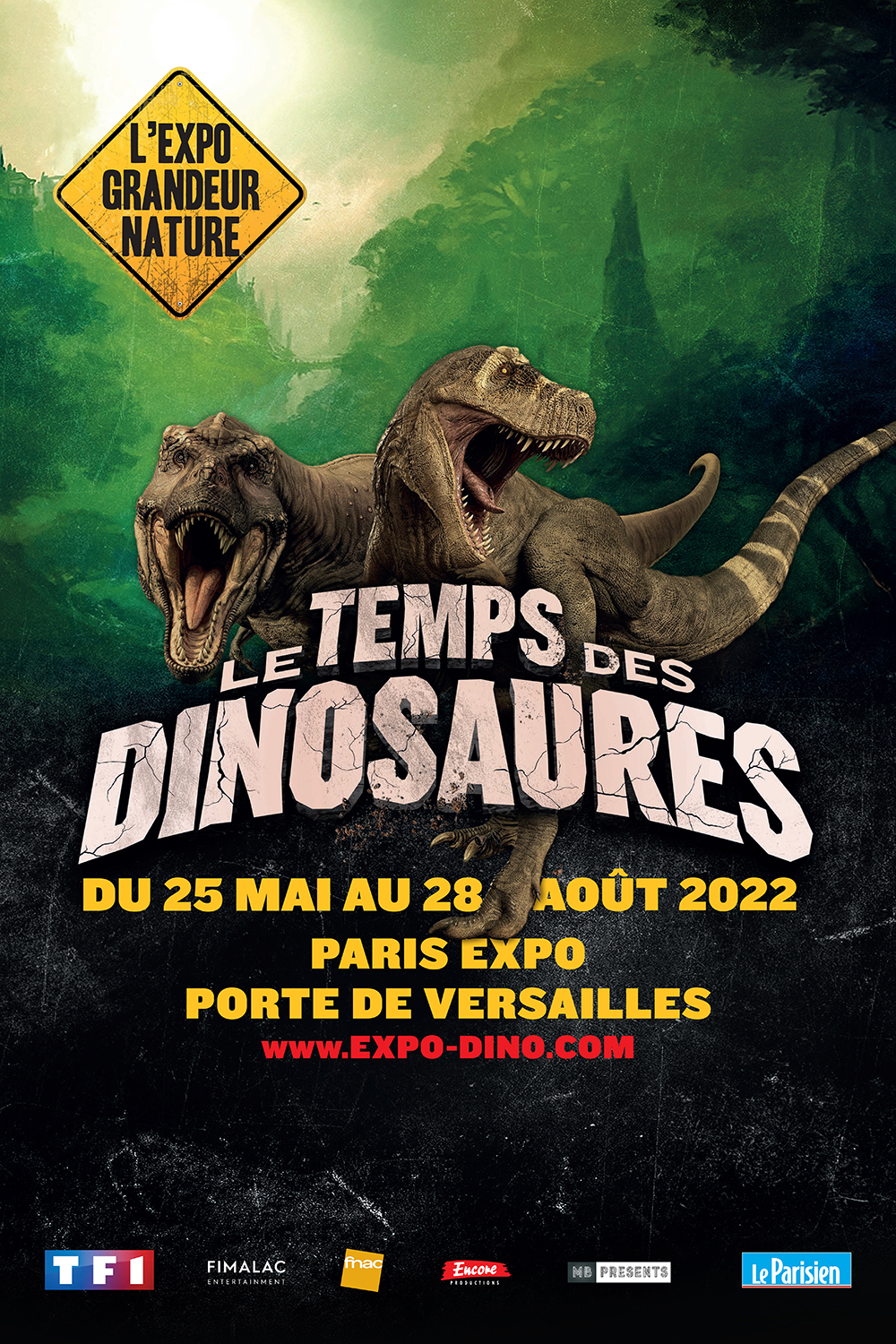 After the release of Jurassic World Dominion, extend your pleasure to dive back into a universe in which dinosaurs are among us. Over 3,000 square meters, this unique exhibition plunges visitors into time and invites them to a great journey over 200 million years recreated by a playful scenography and specimens more real than life. Visitors can observe the dinosaurs, see them move, breathe and even hear them growl and roar thanks to a state-of-the-art robotic system.

All of the life-size dinosaurs presented in this exhibition were made with the help of teams of paleontologists, who were able to reproduce the different species, their sizes and their movements with specific requirements. Each specimen is equipped with a robotic system that, with the help of motion detectors, animates different parts of its body. Some even blink their eyes or move their tongue or fingers; each movement depends on the interaction between the species and their arrangement in the different scenes. A thrilling journey that will transform the visitor into a real adventurer! Aimed primarily at families, this new exhibition is of real educational interest. The replica of a fossilized dinosaur approaches the questions linked to their disappearance and the processes of conservation of their traces. The scenography recalls the environment in which dinosaurs evolved millions of years ago. Visitors are thus immersed in the vanished world of the Jurassic period which is reborn during an expedition in which they are the explorers. Throughout the tour, a short text presents each species and provides information on its weight, size, the period during which it lived, its diet and facts specific to its species. 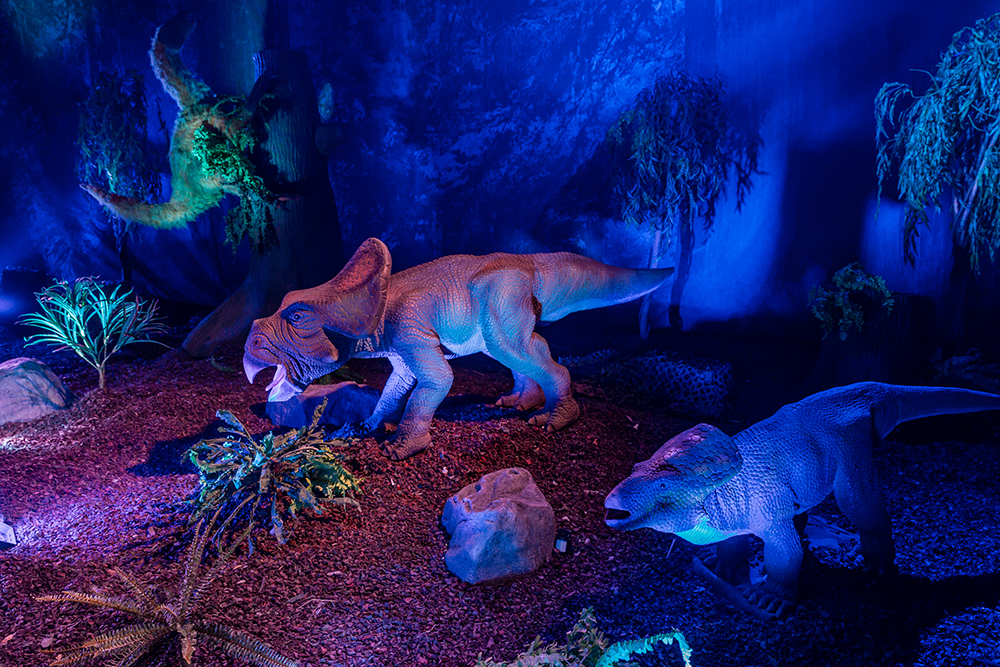 Various fun and educational activities are offered:
- At the entrance to the exhibition, visitors can scan the QR Code to download the "Time of the Dinosaurs" application that will accompany them throughout this adventure. This application offers the possibility to live the exhibition at your own pace and to learn more about the birth, the discovery, the environment and the specificities of the different dinosaur species.
- A fascinating film about dinosaurs that allows you to take a well-deserved break halfway through the exhibition, continuing your immersion in the world of these fascinating creatures that come to life thanks to computer graphics.
- The exhibition's scenography lends itself perfectly to photographs and selfies in front of the largest dinosaur species, including the famous and terrifying Tyrannosaurus Rex! But that's not all, a dinosaur egg can be visited by the children, they will have fun hiding in it and taking selfies as little dinos, all immortalized by the parents.
- The children will have the opportunity to play a game of speed and dexterity to measure their speed. For that they will have to be quick and skilful, 3, 2, 1... let's go!
- To complete this journey, the whole family will be able to dance in rhythm with the dinosaurs by following the choreography of the Dino Dance. Their performance will be projected live on a giant screen.
- In addition to these activities, the exhibition also hosts a virtual reality experience that allows young adventurers to simulate a flight on the back of a dinosaur and observe the ecosystem in which these giant creatures evolved. (limited number of places, extra charge of 5€ per person) 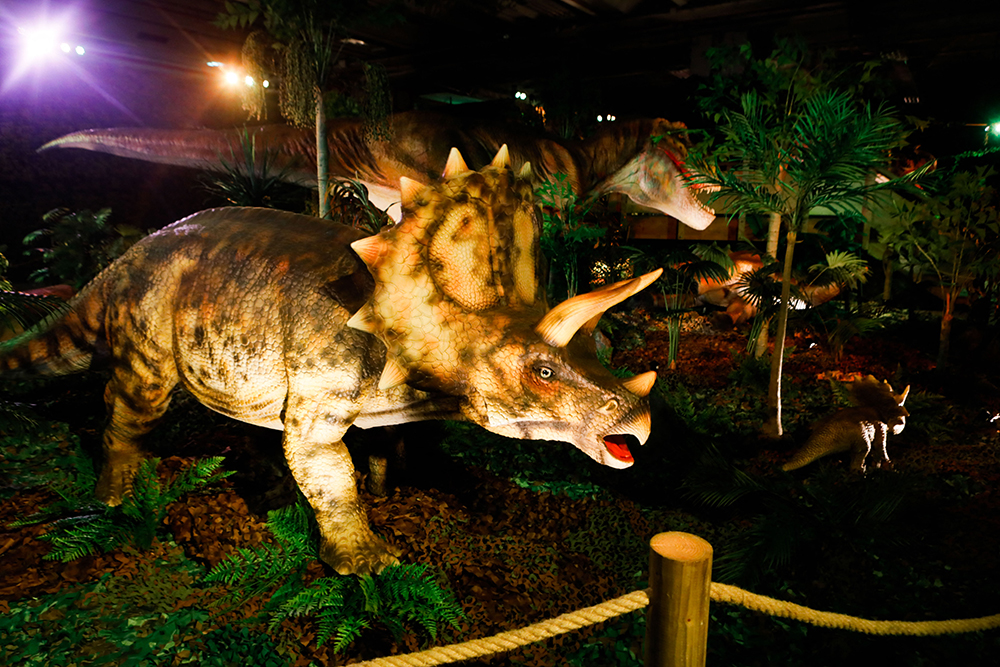 In the Triassic, the continents did not look like the ones we know today. In fact, there is, on the surface of the Earth, only one single, gigantic continent, Pangea. This continent, in the shape of a jaw, or V, encloses a sea, the Tethys; the rest of the surface of our globe is an immense ocean, the Panthalassa. On all Pangea reigns a hot and arid climate; the volcanic activity is intense. It is during this period that reptiles will diversify and conquer all environments. Dinosaurs appeared about 228 million years ago, in the form of small carnivorous or omnivorous animals, and they began to conquer the earth. By the end of the Triassic period, they were already the most numerous vertebrates in terms of number of species. Strange reptiles, called pterosaurs, fly in the sky. As for the seas, they were conquered by large reptiles such as ichthyosaurs and, at the end of the period, by plesiosaurs, other carnivorous aquatic reptiles. But it is also during the Triassic period that animals that are familiar to us today appeared, such as turtles, crocodiles and a group of small animals called mammals. At the same time, several families of plants, typical of the Mesozoic period proliferate. This is the case of conifers, cycas and ginkgoes that form huge forests, while most herbaceous plants are ferns, forming vast grasslands. 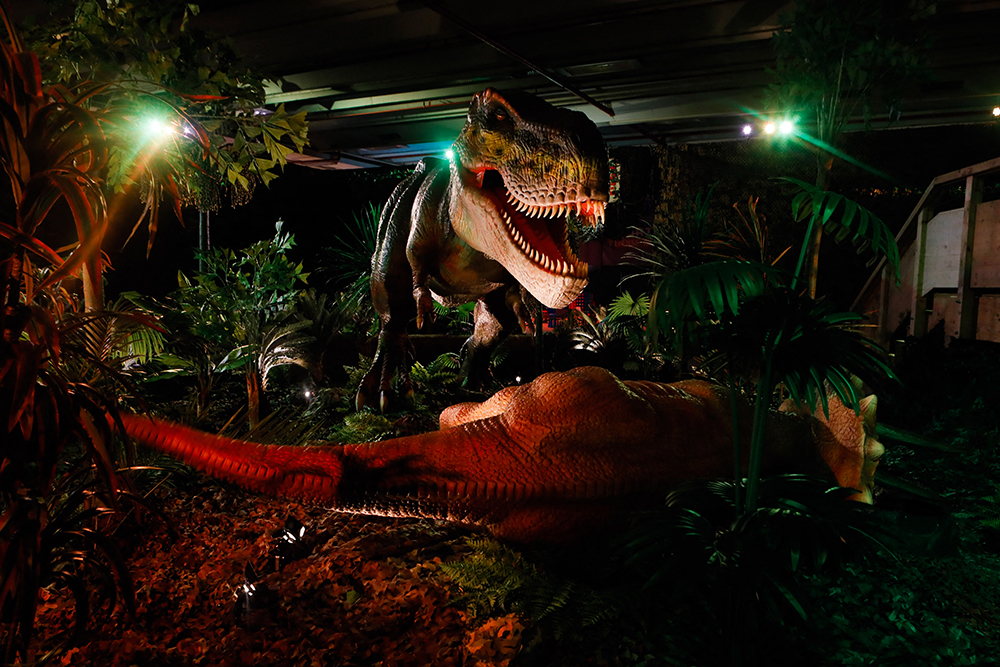 In the Jurassic, the supercontinent Pangea will begin to break up, foreshadowing the current configuration of land. Laurasia, a grouping of North America, Europe and part of Asia, began to separate from Gondwanaland, a grouping of South America, Africa, Antarctica, Australia and India. Between the two appears an ocean: the Central Atlantic, connected to the Tethys Ocean. This is how the continents of the Northern Hemisphere separated from those of the Southern Hemisphere. This breakup of Pangea resulted in a rise in sea levels, which will cover, for millions of years, vast continental regions by shallow seas. On these two new continents, the climate was homogeneous, particularly temperate and warm during the whole period. Dinosaurs developed in an extraordinary way, in an incredible variety of shapes and sizes. Mammals diversify and even if they are still small animals, they play an important role in the ecosystems dominated by dinosaurs. Anurans - frogs and toads - and urodeles - salamanders - appear among the amphibious species. Crocodiles are the most important freshwater predators. Some of them adapted to marine life in the mid-Jurassic period, when marine reptiles such as plesiosaurs and ichthyosaurs ruled the seas. In the sky, pterosaurs are the undisputed masters and at the end of this period, the first birds such as Archaeopteryx develop from the group of theropod dinosaurs. During this period, the terrestrial flora is mainly composed of ferns, conifers, gingkos and cycas. 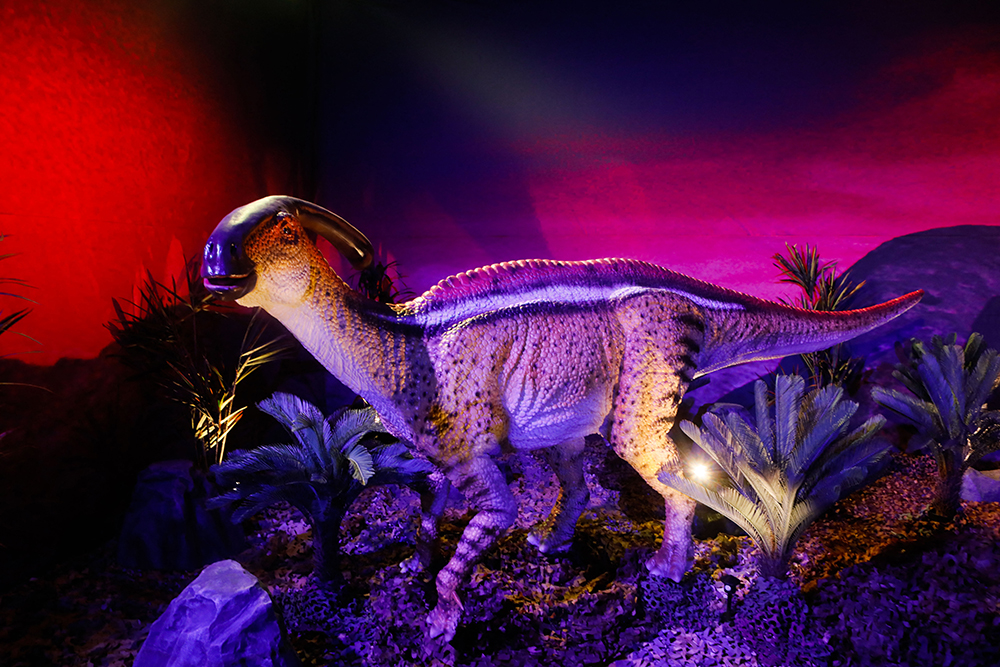 During the Cretaceous period, the continental masses continue to fragment and the configuration of the oceans and continents, at the end of the period, prefigures, in its broad outlines, that which we know today. The South Atlantic Ocean was formed at the end of the Early Cretaceous, by the separation of Gondwanaland into two, with South America on one side and Africa on the other. At the beginning of the Upper Cretaceous, the South Atlantic connects with the Central Atlantic, definitively separating Africa from South America. This marked separation between the continents causes new rises in sea level; consequently, the continental seas reach record sizes during this period. This explains why a large part of Europe, North America, part of Africa, South America, Asia, India and Australia are submerged until the end of the period. The climate remained temperate, but more humid than during the Jurassic, as a result of a more marked oceanic influence. For the first time in millions of years, a trend towards cooling and climatic instability set in at the end of the period in the regions near the poles. Among the vertebrate fauna, dinosaurs reach their greatest variety of forms. 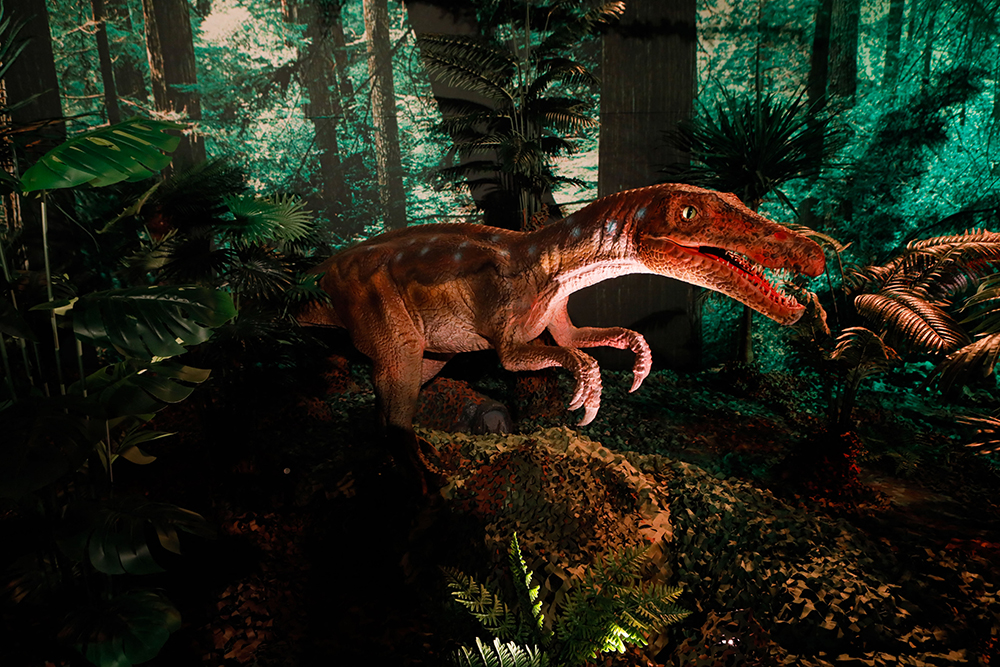 But the mammals will continue to diversify and the first marsupials and placentals (the group to which we belong) appear during the first part of the Cretaceous. Crocodiles, turtles, and lizards are abundant throughout the world. At this time, anurans (frogs and toads) already resembled their current representatives. In the seas, plesiosaurs and ichthyosaurs reached gigantic sizes (more than 15 meters long for plesiosaurs) at the beginning of the Cretaceous; but, thereafter, in the Upper Cretaceous, the plesiosaurs will regress in size and number of species, while ichthyosaurs will disappear. Simultaneously, the mosasaurs appear, reptiles adapted to marine life resembling huge aquatic snakes. Pterosaurs continue to dominate the sky and the largest flying creatures known appear at this time (including Quetzalcoaltus and Ornithocheirus), before declining towards the end of the Cretaceous, where only a few species of flying reptiles are still present. On the other hand, the birds develop and already possess many of their modern characteristics. As for the flora, conifers and ferns continue to dominate the first part of the Cretaceous. But around 125 million years ago, the first fossils of angiosperms, or "flowering plants", appeared: their number gradually increased to become the most important group of the Upper Cretaceous. Even today, angiosperms remain the plant group with the largest number of species in the world. The Cretaceous ended with one of the most massive extinctions ever, affecting all groups of living organisms. 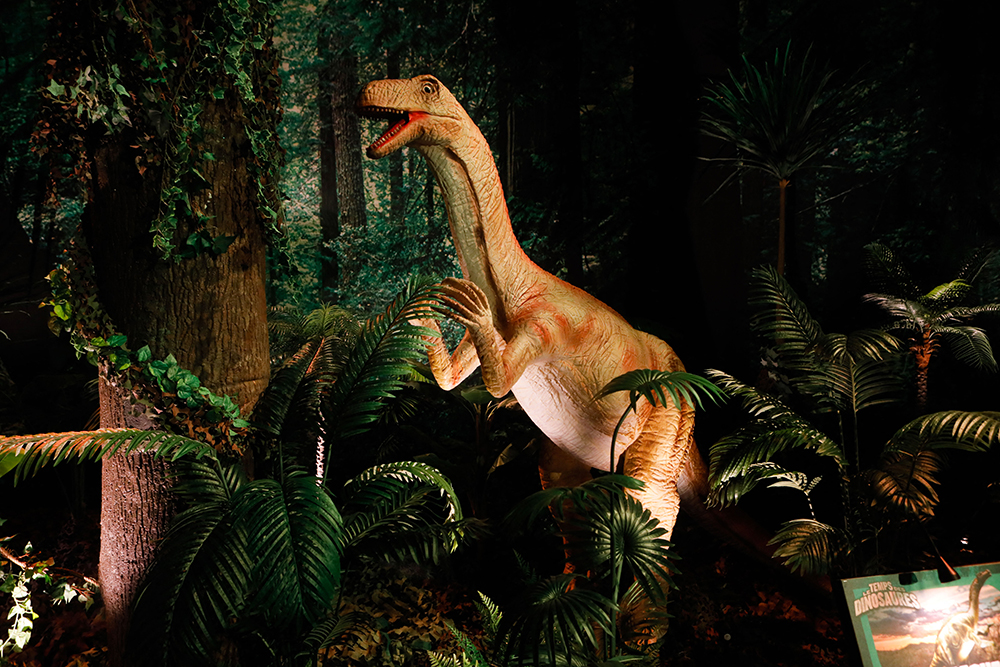 The history of life on Earth is marked by several major extinctions, during which a large number of species suddenly disappear. The most famous of these extinctions occurred at the end of the Cretaceous period and marks the end of the Permian period, about 250 million years ago, when a considerable number of species disappeared from both the land and the oceans. Although marine animals had previously suffered major extinctions, animals had not yet experienced such devastation on land. Many families of reptiles and amphibians disappeared. The marine fauna was also profoundly disrupted: out of some 250,000 species recorded at the end of the Permian, only 10,000 were left at the beginning of the Mesozoic era. Various theories suggest the causes of the extinction of the dinosaurs and other contemporary animals 65 million years ago. Some scientists assume that volcanic activity created extremely unfavorable conditions for life. Others believe that the impact of a huge meteorite was the cause of a "global winter": with the sun obscured by dust clouds, the plants that many dinosaurs ate stopped growing, and the dinosaurs began to die. The herbivores were the first to starve, followed by the carnivores that fed on them. 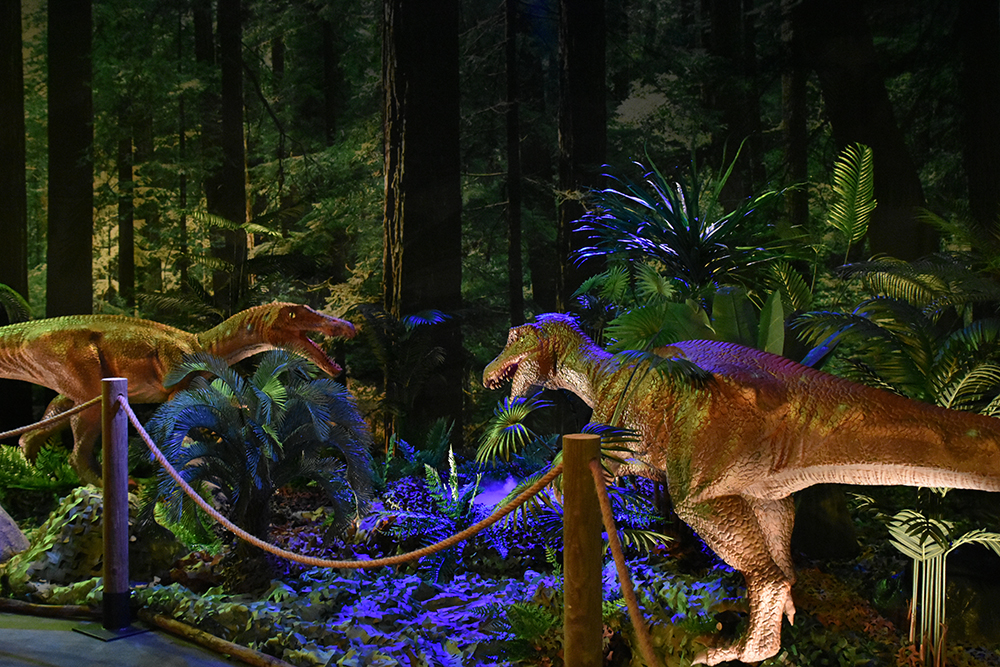 In support of this thesis, a meteorite collided with the Earth at the level of what is today the Yucatan peninsula, in Mexico. This impact generated an explosion equivalent to that of thousands of atomic bombs. Flying reptiles (pterosaurs) and marine reptiles such as mosasaurs and plesiosaurs disappeared mammals, insects, frogs and crocodiles. The extinction of dinosaurs allowed the proliferation of mammals. In the millions of years that followed, they diversified and grew, occupying "ecological niches" left empty by the dinosaurs. Is this the only possible explanation? At the end of the Cretaceous, volcanic activity was particularly intense. Eruptions had thrown large amounts of dust into the atmosphere. At the same time, there were important changes in climate and an unprecedented drop in sea level. Factors that may have also contributed to the extinction of the dinosaurs. 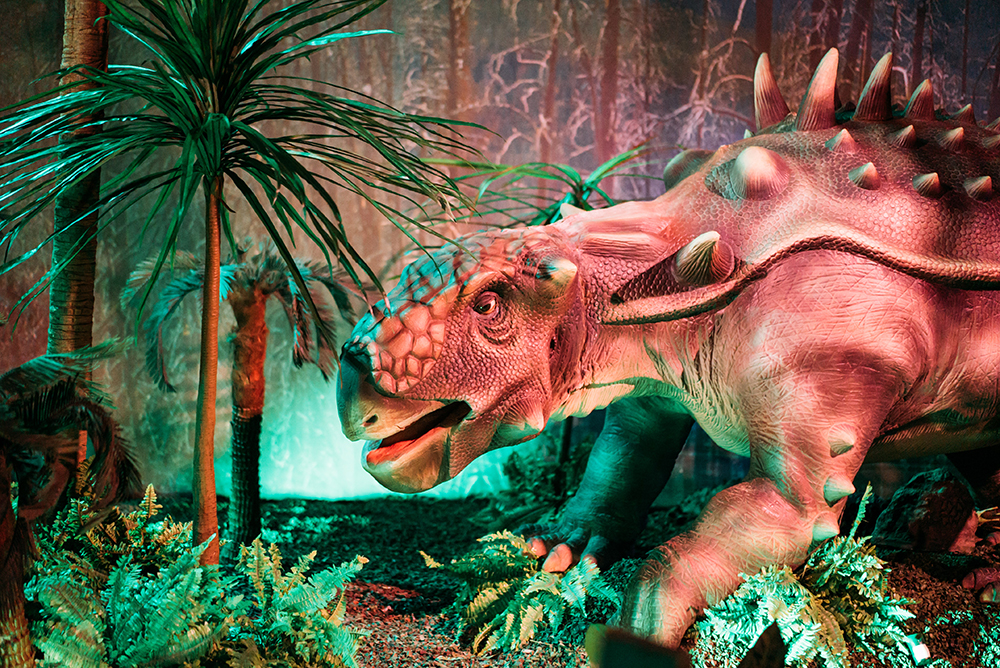 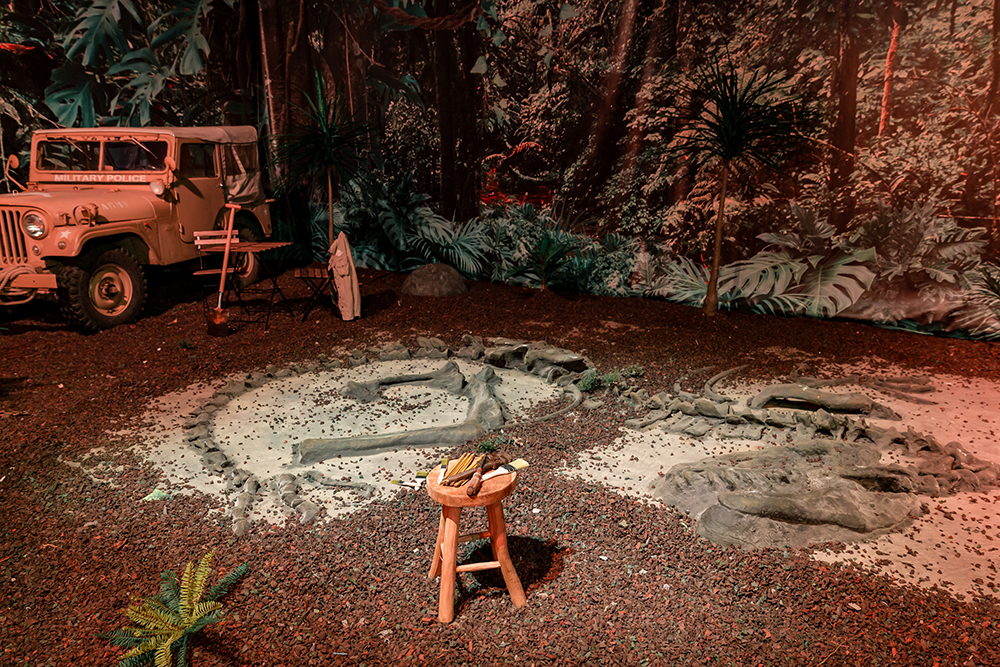 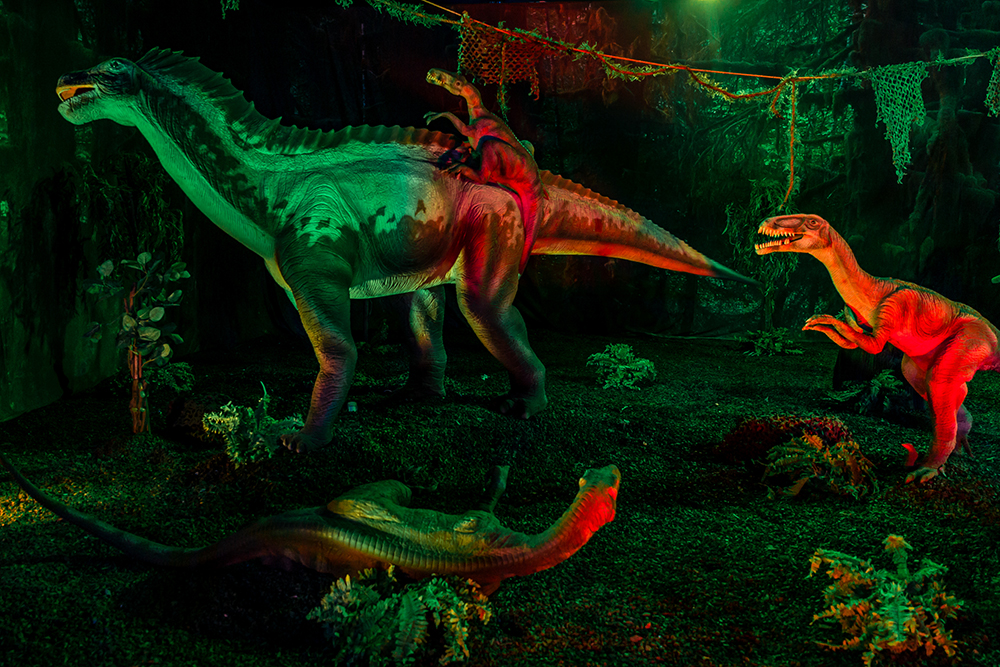