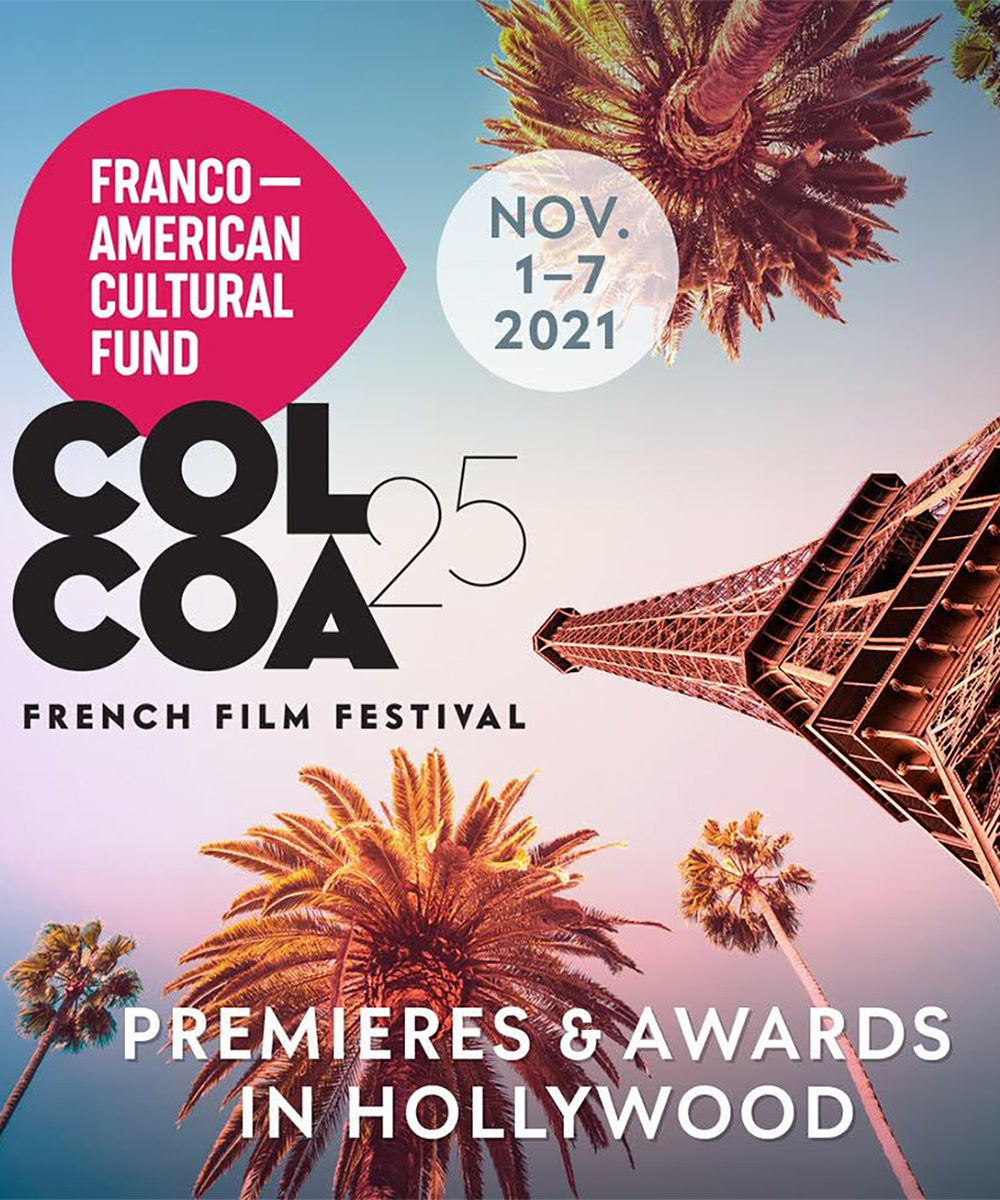 During a press conference held today, Taylor Hackford, director, Board member of the Franco-American Cultural Fund and Colcoa Program Committee member, announced the opening film of the 25th Annual ColcoaFrench Film and Series Festival will be the North American Premiere of writer/director/author Emmanuel Carrère’s Between two worlds, starring Academy Award winner Juliette Binoche. The film will screen on November 1, kicking off the Festival as a live week-long event taking place at the DGA Theater Complex in Los Angeles.

“Twenty five years is an achievement for a Festival. This longevity can easily be explained by its non-stop growing popularity, and to the constant support from the FACF, which created Colcoa in 1997,” stated Taylor Hackford. “But the main reason is because the Festival has always been a unique place for French and American writers/directors to meet, debate and exchange ideas, which is the raison d’être of the Fund. This is also why this anniversary is naturally dedicated to someone who symbolized the friendship between our two communities: Bertrand Tavernier, who passed away last February.”

The Festival is back in-person to celebrate a silver anniversary with strict COVID rules in place, including proof of vaccination and mandatory wearing of masks. The event takes place from November 1 to November 7, at the Director’s Guild of America, Colcoa’s home for 25 years. Dates continue to offer a unique platform to promote French Films and series in Hollywood at the beginning of Awards Season.

“Contrary to what could have been expected after all these months of lockdown, this very eclectic and high-profile program reflects the amazing number of films actually produced in France during the last two years, with a majority of films from Cannes, Venice or Berlin shown for the first time in the U.S. and half of them presented before their release in France,” said Francois Truffart, Executive Producer and Artistic Director, Colcoa.

“In a world that had to shelter in place for a year due to the pandemic, French stories went global (Lupin, Call My Agent) while individuals were isolated at home. The need to connect in-person has been strong and Colcoa will come back as the cross-cultural bridge it has always been between French and American audiences and professionals. For the 14th straight year, we will host our annual Colcoa High School Screenings program and welcome 3,000 high school students from across Southern California. We are seeing enthusiasm from a wide swath of students from all backgrounds and it is rewarding to build the next generation of French cinema audiences,” said Anouchka van Riel, Deputy Director, Colcoa.

This year’s program will include 55 films and series, as well as 19 shorts, most of which are International, North American, U.S. and Los Angeles premiere presentations. Thirty of these films will be up for Colcoa Cinema Awards, including the following selections:

Colcoa 2021 film selection:
- Opening film, November 1:  Between two worlds. Based on French investigative journalist Florence Aubenas’ best-selling non-fiction book, The Night Cleaner, Between two worlds recounts the adventures of Marianne Winckler (Academy Award winner Juliette Binoche), a celebrated author who goes undercover as a cleaning lady to write a book on job insecurity in the gig economy. This very touching film, whose authenticity is underscored by an amazing performance from non-professional actors, opened the Director’s Fortnight in Cannes this year and just nabbed the Audience Award at the San Sebastian Film Festival. It will be released in France and in the U.S. in 2022 by Cohen Media Group.
- Closing films, Sunday, November 7:  Lost illusions, which recently premiered at the Venice Film Festival (presented with Music Box Films), is writer/director’s Xavier Giannoli’s Balzac adaptation,and Onoda, 10,000 nights in the jungle, written and directed by Arthur Harari and the opening film of Un Certain Regard Competition in Cannes 2021.

For the first time, two films already released in the US will be part of the competition for the Colcoa Cinema Awards and presented as a free special screening:
- Titane, by Julia Ducournau, released in the U.S by Neon Films
- The mad women’s ball, by Melanie Laurent. In association with Amazon Studios, This film
will have it theatrical U.S. Premiere at the Festival.

Presented out of competition, the free Colcoa Classics series will pay tribute to writer/director Bertrand Tavernier with rare theatrical screenings of The judge and the assassin and Captain conan, writer Jean-Claude Carriere and a special screening of award winner The discreet charm of the bourgeoisie, and actor Jean-Paul Belmondo with the presentation on the big screen of Le magnifique, followed by a discussion with actor Jacqueline Bisset and writer Francis Veber. Finally, A digitally restored version of Jacques Rivette’s Gang of four will have its International Premiere at  Colcoa. Previously announced, The lineup for the rest of the Festival can be found here:  Documentary, Television Movies and Series, and Shorts.

The Colcoa audience will be invited to vote in the three categories: Cinema, Television and Shorts..  For the 13th year, LAFCA will partner with Colcoa Cinema for the Critics’ Awards.  For the fourth year, a student jury made of high school and college students, will vote for the Colcoa American students’ award.

The complete recipient list of the 2021 Awards will be announced on Monday, November 8 by the Franco American Cultural Fund.  Awards will be given to recipients in Paris (France) during a special ceremony on November 16.

The Colcoa Awards are presented in association with, TV5 Monde USA, and AIR TAHITI NUI.  Other exciting programs offered throughout the festival include: After 10 Series (November 2 - 6); Colcoa Documentaries (November 3-7); World Cinema Produced by France; French NeWave 2.0, exploring a new generation of filmmakers; and the Happy Hour Talks, a series of panels presented in association with Variety (November 2-6) that are free to the general public. Panels will include a tribute to Bertrand Tavernier, a focus on a film composer: Amine Bouhafa for The summit of the gods & gagarine), a focus on a filmmaker (Nicole Garcia for Lovers) and a focus on a producer (Philippe Martin for Lovers, gallant indies & simple passion). Colcoa will also continue its popular Colcoa High School Screenings program with the premiere of Owning it (Les Héritières), written by Johanna Goldschmidt and Laure-Elisabeth Bourdaud and directed by Nolwenn Lemesle.

Colcoa French film & series festival is presented by the Franco-American Cultural Fund, a unique collaboration between the Directors Guild of America, the Motion Picture Association, the Writers Guild of America West, and France’s Society of Authors, Composers and Publishers of Music (SACEM). Colcoa is also supported by France’s Society of Authors, Directors and Producers (L’ARP) the Film and TV Office of the French Embassy in Los Angeles and Unifrance.

Tickets :
Tickets are available for advance purchase online at www.Colcoa.org. The online box office and RSVP will be open until the night before each show at the festival. Tickets will be also available on site at the Directors Guild of America, 7920 Sunset Boulevard, Los Angeles CA 90046 during the event. For sold out shows, some tickets may become available 20 minutes before each screening. Please visit www.Colcoa.org for box office hours. Depending on screenings ticket prices are $14/$10 for adults; $11/$7 tickets for seniors (62+), disabled, and members of American Cinematheque, ASC, ICG, Film Independent, SAG-AFTRA or Women in Film; $7/$5 for students and under 21. Limited opening night tickets available at the Box Office . Tickets are complimentary for DGA and WGAW guild members. All screenings and events before 4 pm during weekdays are free on a first come, first served basis, with no reservation needed.

Covid restrictions :
Only fully vaccinated guests will be allowed to attend the event - proof of vaccination will be required to enter the DGA Theater Complex. Temperatures will be taken onsite upon arrival at the DGA and cleared guests will receive a day-specific wristband. Masks must be worn at all times in the DGA’s public spaces, including theaters, lobby and restrooms. For full rules and regulations, visit https://Colcoa.org/covid-policy/.

All programs are presented with English subtitles or in English.