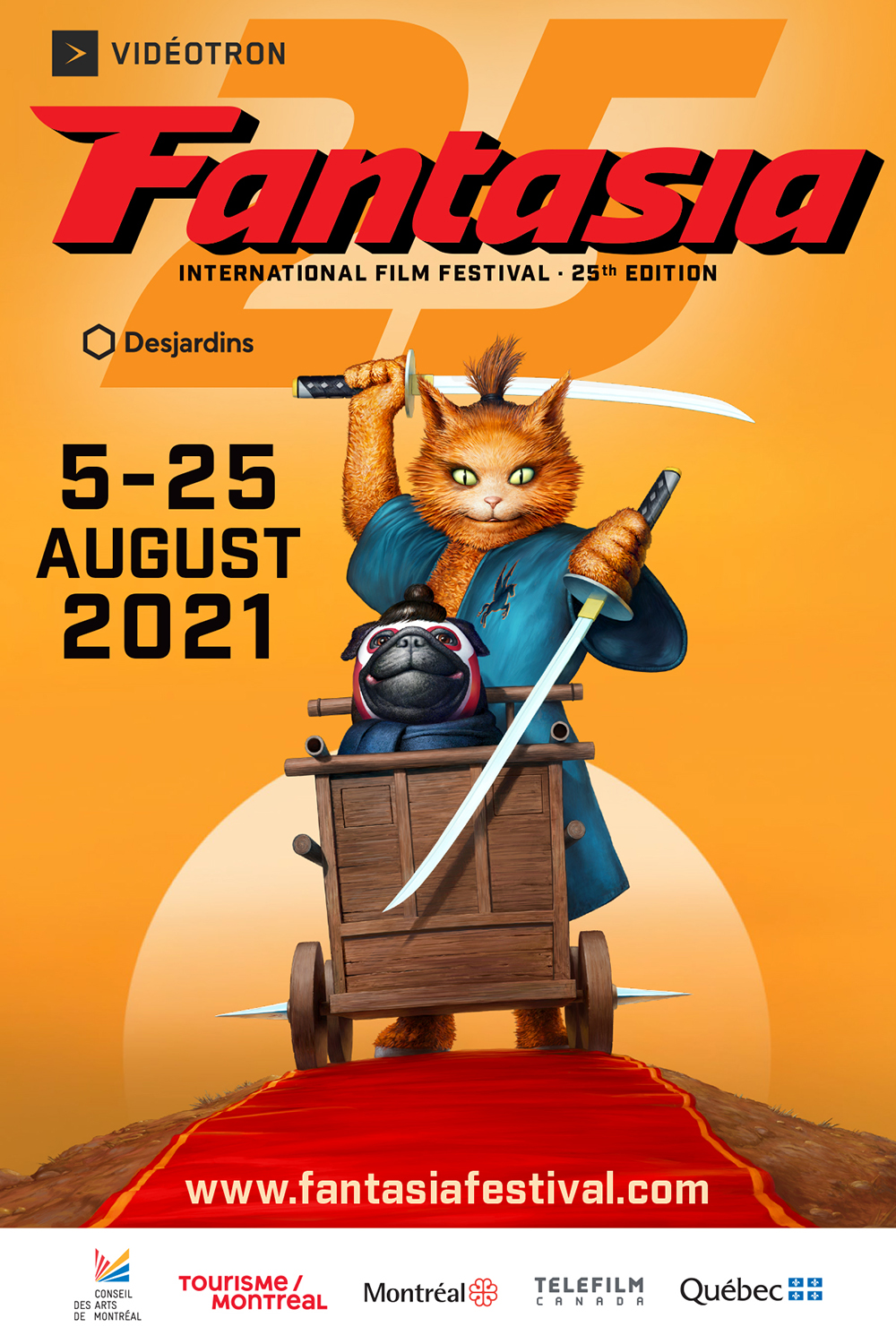 While Fantasia 2021’s films are geo-blocked to Canadian audiences, all of the festival’s panels and special events are free and accessible worldwide, allowing these unique experiences to be enjoyed by fans on every corner of the Earth.  In addition to the aforementioned artist talks by Shunji Iwai, Stephen Sayadian, and Phil Tippett, Fantasia is pleased to announce the following special events.  (Presented in association with WarnerMedia )

Haunting the national consciousness: the rise of indigenous horror  (Saturday, August 7 – 4PM EDT )
Presentation by Dr. Kali Simmons
In the article “The Rise of Indigenous Horror,” Haudenosaunee writer Alicia Elliott notes that, “…many non-Indigenous horror writers depict situations that Indigenous people have already weathered.” The recent exposure of genocidal violence against Indigenous children within the  “residential school” programs which operated in Canada and the United States stresses the truth of this observation even more.  In this lecture, expanded from work presented at the Miskatonic Institute for Horror Studies, film scholar Dr. Kali Simmons will analyze the ways that horror has been deployed in the service of settler-colonialism as well as the ways Indigenous writers, actors, and filmmakers speak back to these troubling stories.

South Africa screams: voices from the new wave of s.a. genre cinema  (Sunday, August 8 – 2PM EDT )
With panelists Nosipho Dumisa (Number 37), Kelsey Egan (Glasshouse), Bradley Joshua (Producer, Gambit Films, Blood & water), Ryan Kruger (Fried barry), Michael Matthews (Five fingers for marseilles), and Travis Taute (Indemnity); Moderated by Todd Brown (XYZ Films)
In recent years, South Africa has lit up the international cinema world with inspired and sophis-ticated genre film reworkings that frequently win awards and leave audiences breathless. Fanta-sia has proudly showcased— and in some cases, launched— many of these works. This year, Fantasia will be World Premiering not one but two South African works, Travis Taute’s indemnity and Kelsey Egan’s Glasshouse. To celebrate, the festival will be presenting a special roundtable discussion between some of the leading talents in S.A.’s new wave. Don’t miss this special opportunity to hear insights and production stories from some of the country’s most exciting artists, brought together for what’s sure to be an unforgettable time.

Konversation: Takayuki Hirao meets Pascal-Alex Vincent (Monday, August 9 – 5PM EDT )
Interpreter: Zen Nakamura
With Satoshi kon, the illusionist, French documentarian Pascal-Alex Vincent demonstrates the profound effect that the late master, in whose honour Fantasia’s animation award is named, had on anime and indeed cinema worldwide. Japanese animator Takayuki Hirao, director of POMPO: THE CINÉPHILE, can attest to it firsthand, having spent his formative years working under Kon on MILLENNIUM ACTRESS and PARANOI-AAGENT. Kon’s legacy is the starting point of a discussion between the two directors. In English and Japanese with verbal translation.

Grady Hendrix live: welcome to the final girl support group (Sunday, August 15 – 5PM EDT )
Bestselling author Grady Hendrix (Paperbacks from Hell, My Best Friend's Exorcism) welcomes you to a very special support group, so have a seat, coffee's in the back, and remember there's no cross-talk. Then prepare yourself for a guided tour of the history of murder books, because ever since the invention of the printing press we've been using it to tell stories about killing each other, from bizarro 19th century Jack the Ripper fan fiction, through Psycho, the industry-changing success of Silence of the Lambs, all leading up to today. Along the way you'll encounter astrological assassins, the female authors who wrote serial killer books first, and primal hamster trauma as together we try to figure out what it means that so much of publishing is about selling murder for fun.

A different monster: black women and the monstrous (Saturday, Saturday, August 21 – 4PM EDT )
Presentation by Carolyn Mauricette
From Sarah Baartman to Grace Jones, Black women are often thought of as exotic creatures and grossly misunderstood, or, like Frankenstein’s monster, they have been put in a category where they are feared and disliked, with observers quick to vilify or dismiss. Yet, in horror, characters who are supernatural beings or “monsters” are actually an embodiment of Black women’s strength and perseverance. We’ll look at some of the most interesting characters— whether vampires, witches, or supernatural beings— and see how even in their otherness, and within problematic representation, they have power and agency and represent the vulnerability and strength Black women have possessed through the ages.

The transgressive urge: horror and the taboo in the 21st century (Sunday, August 22 – 5PM EDT )
With panelists Stephen R. Bissette (Cartoonist, Author, Critic), David Kerekes (Headpress Books), David J. Schow (Writer), John Skipp (Writer, Director), Christina Ward (Feral House), Billy Martin (Writer) and Douglas E. Winter (Writer / Critic); Moderated by Heather Buckley
One of the functions of horror film and fiction has been the unflinching exploration of the for-bidden, the underground, and the taboo. In the 1980s and 1990s horror experienced a surge of wild energy, and a backlash against it. While certain restrictions have loosened, and more per-missive venues for content have emerged in the years since, practitioners of the genre now face other pressures and penalties, potentially higher than before. In a society with ready online ac-cess to just about every kind of content, including eyewitness cameras capturing the most terri-ble of crimes, how has the cultural sense of the taboo, and the role of horror in breaking them, changed? Join us for a discussion about the evolution of this explicit mode of expression as art, exploitation, and rebellion.

Turbo Kid: from film to video game (Tuesday, August 24 – 2PM EDT )
With panelists RKSS (François Simard, Anouk Whissel, Yoann-Karl Whissel), Anne-Marie Gélinas and Benoit Beaulieu (EMA Films), a member of composing duo Le Matos, and key figures from Outerminds (Rémi Lavoie, Odile Prouveur, Guiz DePessemier) and Vibe Avenue; Moderated by Marc Lamothe and Justin Langlois
Born out of Frontières, Fantasia’s international co-production market, and launched at Sundance, the worldwide cult sensation that is TURBO KID immediately put RKSS, its gifted trio of Québécois filmmakers (François Simard, Anouk Whissel, Yoann-Karl Whissel), on radars across the universe. A video game was the logical follow-up! Like the film, it promises to be an homage to the post-apocalyptic works of the ‘80s with cartoonish gore and a heartfelt story while chan-nelling beloved vintage video games. Celebrated Montreal video game studio Outerminds are working closely with RKSS and EMA Films, producers of the original film, to devise a game that will honour the essence of the breakout hit, with synth-wave band Le Matos returning to com-pose a brand-new soundtrack while VIBE Avenue provides sound design.  Grab your gnome stick and join us for a bilingual (French and English language) panel discus-sion with the core creators of both the film and its adaptation to explore TURBO KID’s jour-ney into gameplay.

The 25th edition of the Fantasia International Film Festival will be presented by Videotron in collaboration with Desjardins, and will be made possible thanks to the financial assistance of the Government of Quebec, SODEC, Telefilm Canada, the City of Montreal, the Conseil des arts of Montreal and Tourisme Montréal. A final wave of Fantasia 2021 titles will be announced in late July, with ticket sales commencing shortly afterwards.