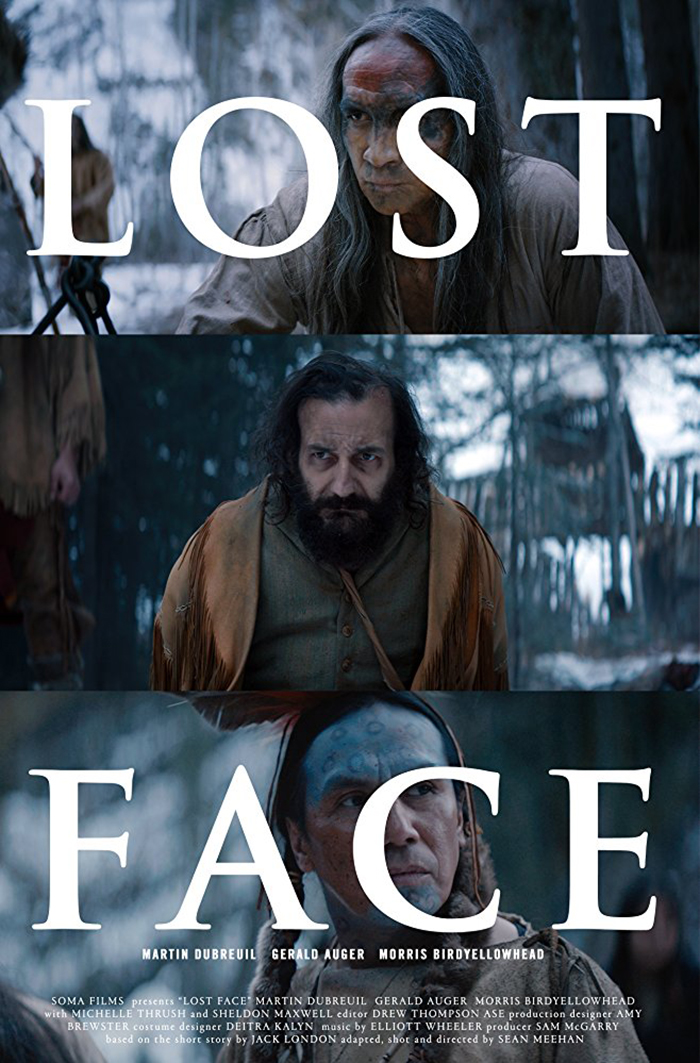 Q: Thank you Sean, for taking time to answer questions on your critically appraised short film Lost Face. I recently had the honor of screening it at The San Diego Film Festival and was curious what drew you to the lesser known Jack London tale?

Sean Meehan : My favourite writers have that rare ability to tell stories that are outwardly simple yet tremendously layered. Jack London’s story feels like a straightforward tale about a man trying to cheat death, but there’s so much more going on in terms of the power dynamics, shifting loyalties, conflicting personal motivations, the tragic history of the Americas, and there’s even a dark, subtle humour – which I love. Gallows humour appeals to me for some reason.

Q: Did you try to emulate his descriptive imagery in your film?

Sean Meehan : Absolutely. There’s a kind of dark, foreign, end-of-the-world type thing going on in the story and I wanted to try and capture that bleak, almost dystopian feeling he creates. There’s a harshness to the landscape he describes and a tangible sense that there’s no help coming. This is the end of the line. We scouted thoroughly for locations that would reflect London’s world and we ended up shooting at a ranch at the base of the Canadian Rockies that is ironically, in summer, used as a girl scout’s campground.

Q: What emotion were you trying to evoke from the audience?

Sean Meehan : There’s no single emotion really. I just wanted to try and capture some of the magic of Jack London’s story and hopefully convey a sense of the mystery, suspense and intrigue I felt when I read the story. There’s so much going on in this simple narrative – a sense of the supernatural, betrayal, murder, anger, desperation, revenge – I could go on and on, but most importantly, I wanted to tell a story that drew the audience in and allowed them to interpret the experience in their own way. People who have watched the film more than once have told me they see more in it the second time around, which is wonderful to hear. I was going for that same kind of layered simplicity in the short story.

Q: I read that the snow was melting during shooting, did this change your visual expectations for the film?

Sean Meehan : Two days before we shot we were “Chinooked.” A Chinook is a hot wind that blows over the Canadian Rockies from the west and in a single afternoon we went from two to three feet of snow to huge patches of mud. Then, during the shoot, the mud would freeze at night and become tremendously slippery, so we were all doing this shuffly walk so we didn’t fall over. We managed to find a couple of truckloads of snow in nearby forests and we spent a great deal of our time spreading it around in shot, which was a fairly unwelcome added pressure. On our second day (of three), it snowed for an hour and a half, further complicating continuity. In the end though, I feel that having more rock exposed by the Chinook and the dirty snow in the foreground actually gave the film an even bleaker, more foreboding look than the lovely, fluffy, soft white snow we thought we were going to get.

Q: Was it important to you to cast warriors from actors of native descendant?

Sean Meehan : Definitely. Jack London’s original story is set in Russian America, which is now Alaska, and the tribe is the Nulato. For various production reasons we settled on Calgary and the main tribes there are the Blackfoot and Cree, so we cheated a little and adapted the story to the Cree culture, which had very similar experiences to the Nulato when it came to the fur traders. All our cast, except Martin Dubreuil and Sheldon Maxwell, are either Blackfoot or Cree and we had several native speakers. Sadly, the language is not doing well, so many of our younger cast didn’t speak it at all. The older actors, like Gerald Auger and Clifford Gadwa, are trying to change that situation.

Q: What else can you tell us about the cast?

Sean Meehan : I can tell you that they were amazingly resilient when it came to the weather. It never got above freezing on any of our shoot days and they were all in period clothing, which meant they were constantly cold. We had a fire going the entire time and a little room with heaters where they could warm up between takes but Sheldon, who plays Big Ivan, spent the entire time without a coat laying on the frozen ground and Morris Birdyellowhead had only one layer of clothing on the entire time. Neither of them ever complained. In fact, I don’t think I ever saw Morris inside the heated tent. Everyone was amazingly generous and good humoured throughout the shoot. It was a very happy set. We smudged every day and had a little Cree ceremony at the beginning to bless the production and I know our Caucasian crew members found that as moving as our Indigenous cast. It really was a special experience working with them.

Q: What bodies of work inspired you to be a director?

Sean Meehan : Clichéd as it is, I saw Star Wars when I was a kid and knew from that point on that I wanted to make movies. It’s pretty much George Lucas’ and Steven Spielberg’s fault…

Q: How do you feel about the attention your film is receiving?

Sean Meehan : Honestly, it’s performed so much better than I ever thought it would. I’ve been shooting and directing commercials for sixteen years and I partly made the short to prove that I could tell longer stories and direct dramatic actors (there’s absolutely no difference there by the way), so I guess I didn’t have the loftiest expectations for the film. I’d hoped for maybe a handful of festivals, and if I was very lucky, maybe an award. As of today, it’s been officially selected 119 times and won 44 awards. I’m still pinching myself.

Q: What are your plans for the future? Are you currently working on anything?

Sean Meehan : I really hope to transition into to films. It would be amazing to get one shot soon. I have a finished screenplay and two more on the way, so hopefully that dream will become a reality before too long.

Synopsis :
Subienkow is in mortal danger. The fort he and his fellow fur thieves have erected in the snow is in flames - attacked by the very tribe they enslaved to build it - now only he and Big Ivan remain. As Ivan is tortured before him Subienkow must think fast to escape the terrible, protracted death that awaits him. He calls over the chief, Makamuk, and begins to bargain…